Indian forts - An attempt to historicize 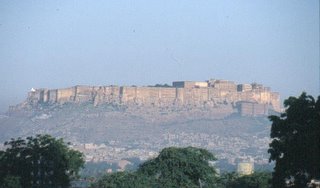 Forts as defensive measures existed in ancient India. The two towns of Mohenjo-daro and Harrapa on the Indus river were themselves fortified particularly the granary in the former which was specifically fortified located at a height of 50 feet. Archaeologically, very few remains have been found of forts belong to the early vedic and later vedic periods, though the epics of Ramayana and Mahabharatha, give extensive references of forts. Ayodhya’s was a fortified town which according to the epic had “walls that extended upto twelve measured leagues from end to end. High are her ramparts strong and vast…” The Shanthi Parva stresses that the king should reside in city defended by a citadel, of having abundant stock of grain and weapons, protected by impenetrable trenches…” (And hey…wasn’t Indira also referred to as Punrandar…destroyer of forts???)

From about the Mauryan period, we have further archaeological evidence of forts in the ancient period in India. Further contemporary literary source of Arthashastra corroborates the existence of forts and considers them as one of the seven elements of sovereignty. India’s Machiavelli (pardon the ethnocentrism) classifies forts into four types – Parvata ( forts on hills), Audaka (water), Dhanvan ( desert) and Vandurga (forest).

Most of the forts that are seen today and which are favourite tourist destinations belong to the medieval period. Just like temples, the multiple presence of forts was specifically a medieval activity and like temples again the study of forts needs to be contextualised in terms of the socio-economic, cultural and political factors.

(For the usual what,wheres and whens of forts click here