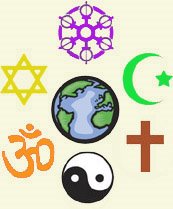 Giving the context for the text

Trying to problematise religion for children (grade VIII), I experimented with something new. I had to deal with Reformation and at a later stage I also have to deal with Bhakthi movement. The urge was to help the kids get a concrete understanding of religion that was not simply in the realms of the mystical or religion as an entity that all of us had to treat in very reverential terms but the effort was to help the children see religion serving some concrete utilitarian needs. And when those needs were not met, religious practices of the people witnessed lot of changes. The point was to demystify religion.

I identified four distinct phases in the evolution of religion.

The idea was to help the children to see connections between these four periods and how religion and religious ideas change when the uncertainities of a given age changes. For example in early pre-historic age the very fact that forces of nature like rain, wind and sun were worshipped is only to be expected given human ability to counter, understand and overcome these were extremely limited. Likewise with the emergence of surplus and a political apparatus (i.e. the river valley and iron age cultures) to safeguard and distribute these surplus it is not surprising that monarchs themselves were revered as Gods.
In feudal epochs religion saw tremendous churning which on the one hand was always fraught with the possibilities of being utilised as an instrument of social and cultural change but on the other also witnessed institutionalisation giving the ruling classes greater control over the toiling masses. It was the former tendencies which matured into the reforming movement led by the likes of Martin Luther and John Calvin in Europe and people like Nanak and Kabir in India with beginning of a new period (the early modern).
At one level many uncertainities like death, material security are constant with us even today and also the fact that when we move to the next epoch, we do not start with a clean slate and carry forward many practices from our earliest pasts into our current religious beliefs.
I concede my attempt here tends be reductionist but given the way people are increasingly looking at religion as the ultimate arbiter in one's identity and religious identity as being one monolithic entity such generalisation is needed.

It is only after doing this exercise (check the worksheets out here) that I proceeded to give the what, wheres and whens of Reformation in Europe.
worksheet/activity based