Theatre for more hands on history 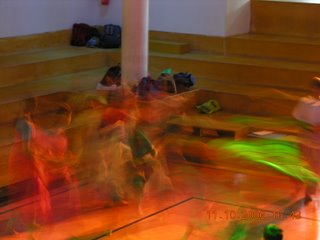 The swirls and twirls of the dancers

The greatest challenge that any history teacher faces is to get students involved into the past. How does a teacher make the past familiar to the student, in a way that students can identify with the past, or its parts, at some level which brings out the relevance of history? This becomes a more complex and difficult task when a teacher like myself attempts to reconstruct the past focusing on the processes that go to shape certain events (rather than the events themselves which constitutes the subject matter of History in most history books. Alas!) in the past or understand those aspects of the past which helps to relate the present of festivals, entertainment, sports on the one hand (i.e. popular culture) and the present of social, political and cultural issues on the other.


In this respect theatre emerges as a helpful medium in exploring history in a multifaceted perspective. Theatre becomes all the more important to make the rather abstract kind of history of hows and whys,of seeking to understand contemporary social and political issues experiential rather than providing a purely emperical approach of dates, events and individual exploits and then enacting all that in a drama. In the latter approach theatre largely remains an embellishment which certainly 'makes history fun' but it certainly leave the question of relevance unanswered. 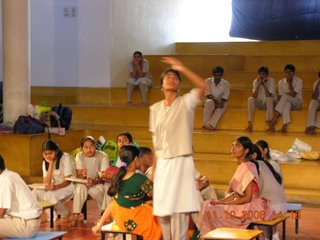 Sohna, the girl pays for her 'tomboyishness'


At TVS school, Hosur under Tamil theatre personna Pralayan I had the opportunity to observe and help Pralayan in formulating a new approach to the interpretation of ancient Tamil history. This specifically included the period covering the epics Sillapadikaram and Manimekhazlai and what is referred to as the Sangam age. Through a theatre workshop involving students of classes VIII to XII, we tried to look at this period of Tamil history (which went beyond the laudatory and reverential, the dominant mode by which Sangam literature is conventionally approached) through the perspective of gender. Beginning as a history project the students are shown going back in time to interact with both historical and literary characters to unearth the complexities of the past. (The play after three weeks of intense workshop was finally put up for the most important stakeholders of the school - parents and few other well wishers as well on November 11 and 12 to a very positive response) 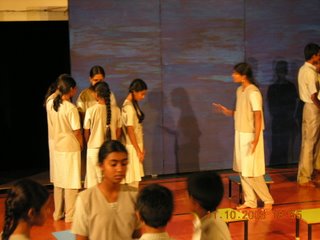 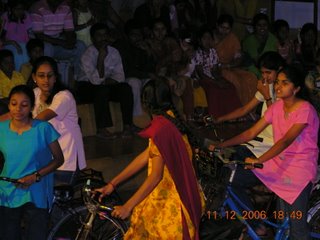 The students cycle into the past 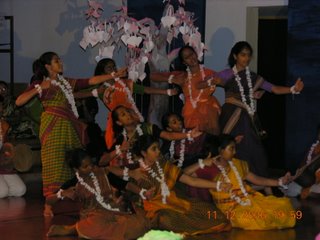 The students go back in time where they discover the verve and spontaniety of the Panars and Viriliars, the bards of the Sangam era

Given the overall approach of the play where we sought to ask different questions about ourselves and our past, the characters were presented in different light. Thus the danseuse Chitrapathi, Madhavi's mother is seen to be a person who understands the inherent hypocrisies and double standards of the patriarchal order of the times. As the students discover, her acceptance of her stigmatised identity is arrived at after tremendous critical engagement and reflection with the 'gendered' state of affairs during the epic times. Likewise Manimekhazlai, Chitrapathi's grandaughter and her act of becoming a Buddhist nun was not merely an act of individual salvation but more to register her protest against the dominant patriarchal order in ancient Tamil Society. Avvai, the single, young poet-singer of the Sangam times who is often confused with the Avvaiyaar mythologised in S S Vasan's bio-pic sums up the travails of women in early Tamil times. The most extolled and revered of all the characters of the Tamil epic - Kannagi, as the fervent, yet dutiful wife whose curse and anger on her husband's death at the hands of the Pandya king consumed the city of Madurai in flames, appears in the play as vulnerable, silent, almost innocent. The motive was not to impute victimhood to her but on the contrary, as the children question in the play: "If the sense of injustice to her husband could provoke this seemingly quiet woman to a rage that consumed most of the inhabitants of Madurai (note: except women, children, the learned but not the people living in the shanties where Kannagi and Kovalan where given refuge by Madri) where was this rage when Kovalan leaves Kannagi for Madhavi?" 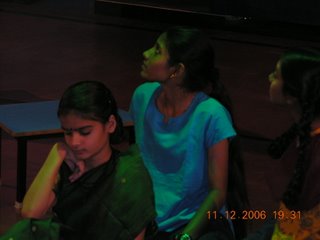 Could this so benign a woman really be Kannagi?, the students wonder 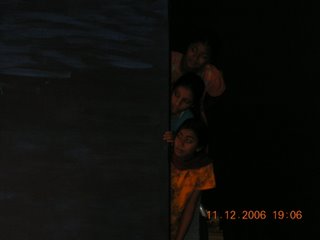 Students peep into the past

All the other characters that emerge in this play, not just women, are given their own subjective voices and emerge with multi-dimensional aspects. On the margins issues pertaining to linguistic identity is also addressed and questioned.

What was unique was the whole process in which the workshop shaped itself - dialoguing before on each of the many issues that we dealt, encouraging the students themselves to ask critical, 'uncomfortable' questions which otherwise are glossed over in conventional discourse. Naturally middle and high school kids are still too green to understand issues of this ilk in all its nuances and ramifications and the skepticism of bringing in 'adult' themes to the fore before children still remains a moot question. But then does children's theatre have always to be about enacting Cindrellas, Ali Babas in an empirical fashion? Will it be 'adult' to contextualize these popular themes in terms of the social and political? Further still could we 'interpolate' newer post-modern perspective into the mental landscape of 'juvenile' minds? Would it be cognitively appropriate?
If we are all agreed on Vygotskyian perspective that cognitive abilities are also culturally, socially determined implying that the very act of perception, cognition is again a construct, then my answer to the above would be in the affirmative. 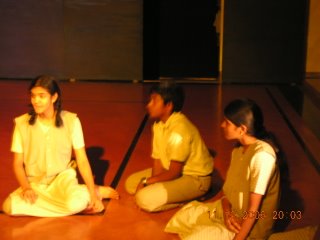 Students try to figure out Avvai - single, young but yet erudite 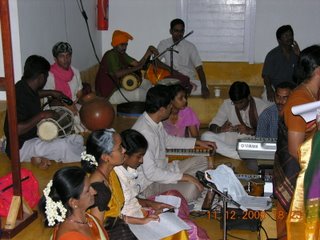 One of the highlights of the play was its music - largely the contribution of Ms Shanthi and Ms Muthu (the latter who substantially contributed in crystalising the script) of TVS Academy, Hosur in terms of lyrics, not to speak about music teachers of TVS Academy Hosur and Tumkur, Mr Nagaraj and Mr Subash respectively who set the lyrics to appropriate ragas. The songs and music continue to haunt me even today and will haunt me (and all those who were part of the play and those who had the fortune to see the final presentation) for many years to come. I should also mention the contribution of the students themselves here, in particular Narasimhan (TVS Academy, Hosur's own Umayalpuram Sivaraman) and Vishal on the mrindingam and Vaishnavi, Gayatri and Janani with their stunning vocals. The choreography was handled very well by Ms Meenakshi 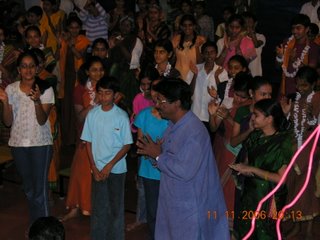 Pralayan has the audience on its feet...a deserved standing ovation
children's theatre and history