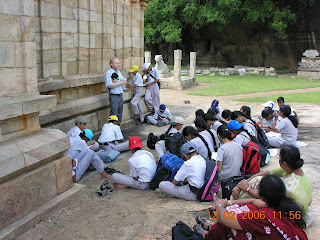 Like theatre which enables children to 'experience the past' in a fashion which goes beyond the empirical, linear, 'narrative', event centred history, yet another method of making history experiential is visiting places where 'history has transpired'. When I say history has transpired I mean it in a very conventional sense for I actually believe (and which I have been stressing all along) that history is not so much something which happened in the past but more a method of enquiry (inquiry?) to understand various aspects of the present in which past becomes an important reference point.


It certainly helps the child to see a place where important events have transpired, if such a place has something tangible to offer like a temple, fort or some monument which can even be felt and some mental picture can be visualised by a child. It was in this context that I had organised a Chola temple study tour with the help of Dr S Suresh, noted historian and archaeologist with specialization in Roman antiquities, coins and south Indian temples. Currently associated with INTACH, I chose to do the chapter on the Cholas in situ viz Thanjavur district which was early medeival Cholas core area. 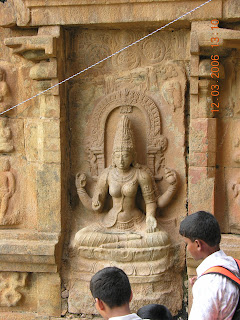 We covered four important temples of the Cholas beginning with their very first at Naartamalai built by Vijayalaya Chola and ended with the Brihadeshwara temple at Thanjavur but it was in the Airateshvara temple where we could see the culmination of Chola temple building genius. As the children of grade VIII went around these temples Suresh unfolded the political history of the Cholas even as he put forth the unique features of each of the Chola temples. It was indeed hands on history learning at its best and to make sure that the children internalise much of what was being told to them I had also prepared a template consisting of questions which were pertinent to the temple tour. (CLICK HERE TO SEE THE TEMPLATE) While it was no doubt important that the children get to know as much of the details on the Chola temples i.e. the folklore about the temple, its unique architectural and artistic features) the other very important purpose for me was to help children relate to these places temple/monument in a manner they would connect to a place of immediate relevance like a film theatre, playground, shopping malls, etc. These latter places bear immediate value to them for these are the places of their socialisation through which their identity is constituted. I think it is important for us to locate all these manifest aspects from the past i.e temples, forts, museums etc in such a mental landscape of a middle-school child. 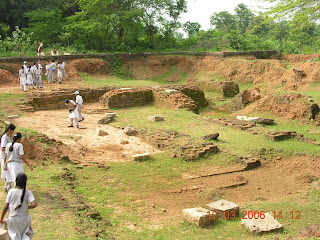 As you would gather by looking at my template, towards the end I have laboured to help the students to figure out the relevance of such temples in today's world. I have drawn analogies with present day cinema halls, shopping malls, etc. What is the link between the two? A place of commerce like shopping malls today to a place of religion like a temple? Because temples in the past also had temporal significances and not just spiritual and religious. Temples were indeed places of socialisation and it would have impacted the people the same way a shopping mall today replete with cinema halls, restaurants, shops impacts us. Because it were in these temples one came across dance, music, art and a general meeting ground for sundry (of course with the exception of the untouchables and few other lower castes) It were in these temples places one could 'chill out' then. By interacting in such spaces, (temples in the past and shopping malls today) one's identity, world view, mindset etc is shaped. It's only by visiting these old temples and observing the wonderful sculptural panels, its different features of vimana, mandapa, gopura that we can visualise the nature of socialisation and identity formation of the people in the past who frequented them in the same way we frequent contemporary public spaces. Indeed it helps us to understand better how present public spaces of shopping malls, streets, cinemas impacts us. It makes one more conscious about those forces which shapes our identity, consciousness which we usually tend to disregard or take for granted. 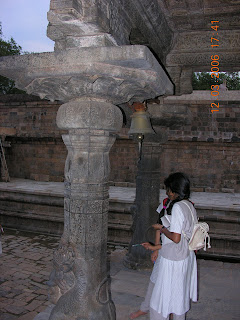 Therefore it is for these reasons that all the remnants i.e. temples, forts, coins and even the non-visible and non-tangibles like language, songs, folklore etc which have their origins (shrouded?) in the past have to be safeguarded. Safeguarding our heritage therefore is not so much to protect our past out of some sentimental reasons but in fact to figure out the myriad ways in which one's identity is shaped and constituted today for which past becomes a vital reference point. Like I keep saying history is not studying the past for its own sake but more to understand the present.

The issue is not merely to understand temple art or its significances let it be political, social and cultural (and it was my endeavour to help children to see temples much more than a place of worship) but to see its relevance even today.
Yet another aspect that I seek to labour here is that by merely looking and observing the temples or monuments would not help a child to appreciate better the importance of the past and its relevance. That relevance can only emerge if as a teacher I seek to ask the kind of questions which help the child to historicize issues which are central to them. (here the issue was socialization and identity formation)What is needed is to contextualise these issues in some framework. My own feeling is without the questions (as given in my template) on the need for safeguarding the temples, and an account in first person on the views of the temple as a dancer, worker, priest and a king (the most important stakeholders in a temple)the temple visit would have been fun but the learning, in terms of critical thinking, limited.
Please look at my earlier post on temples too...
The whys and hows of temples...
(Snaps from top to bottom- Suresh has the ears of my students as he unfolds the political history of Cholas at Nartamalai; Students admire Goddess Saraswathi at Gangaikonda Cholapuram temple; Students see the first archaeological site of the Chola palace at Gangaikondacholapuram and Shreya is awestruck by the multifaceted intricacies of Chola skill exhibited on the pillars of the Airatavereshvara temple, Dharasuram)
(In a similar fashion I had also organised through Bangalore Walks, a historical tour of Bangalore for junior school kids. But I'm not too sure what impact this would have had for kids who had just about began to acquire the skill of chronological abstraction in a very formal sense. Also was not around to check its effectiveness and in any case was not really calling the shots in the classroom. Guess one would get my drift...)
History through 'heritage tours'