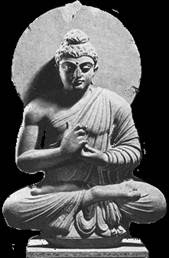 It can be be argued that History is essentially about time. History is conceptualised through time. It is in time that history becomes. Indeed history is time. But to get this fundamental albeit abstract idea to children at middle school level is naturally not easy. How does a child get a sense of time? Though we have this rather Orientalist conception of time standing still in India, we can use a visual time line to help children to draw some connection between art, artifacts, architecture on the one hand and the time frame these latter belonged to, on the other. In other words a child by looking at an image or any material, work of art, architecture, coins etc, is able to connect those images or things from a particular epoch in the past and by contrasting these images over a period of time the students perceive historical change.
Here the past epoch is not defined in terms of numbers i.e. precise dates. Instead we give the time frame in terms of art, architecture and artifacts. The teacher helps the child to draw linkages between an image and the time frame. For as we all know, even as adults we tend to relate better to visual medium. Here we are trying to utilize visual images of the past and historicize them or chronoligize them. 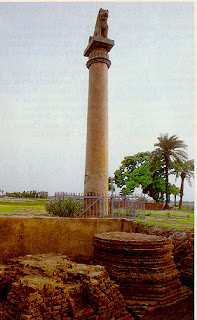 I also emphasize time frames here for we tend to be absolutist and fetishistic about dates. It is no doubt important not to associate the Cholas with 18th century AD and the Mughals with the 12th century. Likewise we cannot associate Cholas with Kashmir or the Mughals with Kerala. But nevertheless rather than knowing the exact date of ascension of Rajendra Chola to the throne or the exact year when a particular temple was built, it would be historically more important to know and locate the Cholas within an epoch or time frame rather than exact dates. If a child or even a teacher goofs up with a particular event by few years, what is perhaps more important is to know the epoch and its social, economic, cultural, political constituents. By that yardstick the Mauryas, Satvahanas, Kushanas, the Sangam period etc can all be classified as belonging to one time frame i.e. ancient but importantly we need to highlight the commonalities in the visual manifestations of these dynasties i.e. art, architecture.

Most of the teachers in history use dates merely as numbers. For example 500 AD, 645 AD, 1526 AD occur to children merely as dates and very rarely we as teachers care to help children to figure how many years in the past are we talking about. Instead if we say the year 1206 AD, the beginnings of political Islam (establishment of Delhi Sultanate) in India would mean (2007 AD - 1206 AD = ) 801 years back in the past, the student is more likely to gain better appreciation of the number of years past we are talking about. And that many years in the past, if we tell them, the material manifestation of that period in terms of art, coins, architecture were these...(showing them the pictures of art, coins, temples, forts, etc and much rather have the kids taken to few historical sites in and around your place), the student thus gets to better appreciate (by looking at the image of Mathura Buddha or Gandhara Buddha), the time frame they belonged to. Of course in the same time frame different cultures develop and consequently the varied cultures had varied visual representations. For example the early medieval south India from 600 AD beginning with the Pallavas and Chalukyas up to the Hoyasalas and Cholas in 1200 AD can be treated as one time frame or epoch but yet each of these dynasties certainly had a distinct, unique and separate visual manifestation when it came to their art, architecture and coins. Like there is a Chola style, Hoyasala style, Pallava style, Chalukya style of temple building which all belong to the epoch/time frame of early medieval south India. As teachers we need to familiarize the students and help them to contrast, through as many pictures, the distinct temples styles of Pallavas, Cholas, Hoyasalas etc as emerging from a distinct time frame ( i.e. early medieval) and once again contrast these with images of Gandhara Buddha, Mathura Buddha, punch marked coins of the Mauryas, the Mauryan and Gupta pillars etc from another time frame i.e. the ancient period in India. Likewise the early medeival temple architecture can be contrasted with pictures of the Qutab minar, Red fort, Jama Masjid etc to help children see how the change in art/architecture was a reflection in changes in culture, religion and polity. By using images,pictures and field visits, all powerful visual mediums, and then delineating the socio-political and economic changes will better help children in understanding many aspects connected to history. For example the mushrooming of temples in the early medieval period when contrasted with the Buddha images, viharas, chaityas, stupas that were in abundance in the ancient period tells us how Buddhism waned by the early medieval period to give way to Brahmanic Hinduism. This maybe a simple point but children and teachers generally do not tend to see these pictures in a chronological order and as making a much deeper point of political, religious and social change. As things stand pictures of monuments, temples, forts in our textbooks (and many textbooks have little and of poor quality) are not even given a second look by the teachers though children are more tuned to take cognizance of visuals than print.

Click here for a worksheet which gives you an idea how I used pictures/visuals to put across my idea on chronologizing history and more.
worksheet/activity based