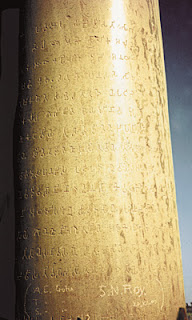 The pillar edict at Lauriya-Nandgarh, Bihar in Brahmi

Tried using this activity worksheet (click here) while dealing with the Mauryas and Asoka. The idea was to help children relate to Asoka's dhamma and make it personal for them and secondly I wanted to underscore the ethical aspect of Asoka's dhamma (and Asoka dhamma was basically a means by which Asoka sought to administer the empire) in contrast to the rather instrumentalist notions embedded in the Arthasahstra. I generally approach the Mauryan period more on the basis of the framework of Prof R S Sharma and less of Romilla Thapar. Prof Sharma, as one would expect from him, gives a materialistic view on the factors that lead to the strengthening of the Mauryas. Iron and its widespread use and Magadha's nearness to the rich iron ore deposits in the Gondwana belt gave Magadha that edge to dominate as a janapada over the other janapadas in the Indo-Gangetic belt.
Sharma also talks about topographical factors like the elevated location along with the forests in the vicinity which added to the "resource richness" of Magadha, which the Mauryas exploited to their advantage and built such an vast empire.But as and when the "material" advantage (use of iron and iron implements, pottery etc) had spread to other parts of the empire, that unique material advantage was lost and the Mauryas were eclipsed. (Source: Sharma, R.S.,Ancient India, NCERT, New Delhi, 1984) The other view is how Asoka's liberal dhamma which focussed on ethics helped to weld a vast geographic space even as he could have used force to bring people under his suzerainty. Such a conscious use of liberal, tolerant, non-violent and ethical principle was perhaps the first such attempt in Indian history where till that point in time people had come to see and accept subjugation only through war and struggle. Of course some may counter this with the example of Rama-rajya which was supposedly dharma rajya again. But this is more in the realms of mythology and less of history and even mythologically speaking Rama's reign has far too many blemishes to be characterized as ethical.

While I did not get a very emphatic response when I tried to discuss the material factors that made Mauryas strong (save a few students), the former worksheet evinced a much more keener response from the large majority of students.
worksheet/activity based