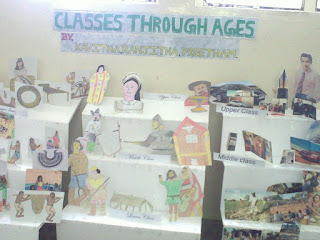 While dealing with the period of revolutions for students of class IX which includes the French, English Revolution and the American war of independence, it becomes important that a child develops some understanding of classes. At one level classes are determined by the means through which groups of people earn their livelihoods. Classes are embedded in the lifestyle in which people experience themselves, project themselves and indeed identity themselves with. In other words class background of people can be identified on the basis of culture, ideas and the material life in which people socialize.

As an activity/project I sought to help the children to notice this simple but a very important fact. Very often it escapes the notice of children (and even adults) that every aspect of our lifestyle, we consciously and often more unconsciously project our class background and it is important for one to recognize this. And for which children need to be equipped with a context to frame and recognize classes. 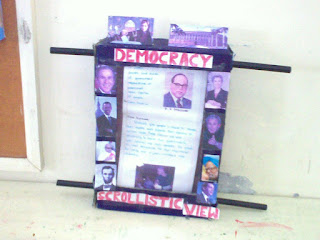 Of course at one level people certainly are aware of classes in very simplistic terms as people who are rich and those who are poor. But we need to go much beyond this simplistic schema to bring in a bit more complex schema where, as mentioned, we look at classes in terms of the ways through which people earn or make their livelihoods. So under such framework we come across middle classes who are basically the professionals of doctors, engineers, lawyers, journalists (and the humble teacher of course), but who could be having a lifestyle (given the high salaries that management and software professionals make), which could rival and best those of the bourgeoisie classes. The latter classes (can include industrial entrepreneur as big a player like the Ambanis or Tatas or it could even be those who run a small and medium enterprises/factories in towns like Hosur and Coimbatore and not to forget the small shop owners and retailers) are those who do not 'make money' through salaries and wages but through profits and margins. Then we have the working classes in both organized and unorganized sectors who eke out a living through wages. 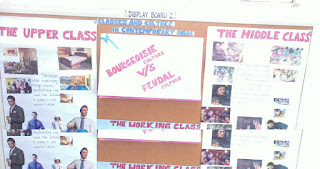 We also have the feudal, landed elements of our society. The feudal classes in India have evolved in such a complex process that although most of them derive their income through the growing capitalist relations of production where agricultural produce is sold in the open market and wages paid to workers, many of the attributes of India's colonial and medievalistic past are manifest in their lifestyle. And then these same classes in India dominate its political scene and hence sycophancy, servility, opportunism, the values that define their social life are so evident in their politics too. Indeed given this classes preponderance in politics, Indian politics itself has become synonymous with all the latter attributes and much worse.(This was brought about by two sets of groups in their presentation through their reading of Indian democracy and politics)
The bourgeoise and most middle classes are also identifiable with their patently consumeristic lifestyle and their constant hankering for things. The working classes' lifestyle is characterized by wants, frugality, austerity, deprivation, lack of hygeine and ill health.
Thus classes and their attributes are manifest in many domains i.e. language, lifestyle, mannerisms and such classes have been manifest across time and across space. 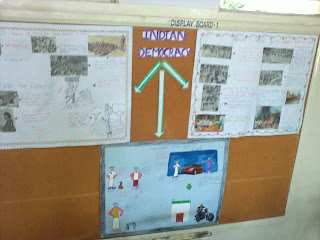 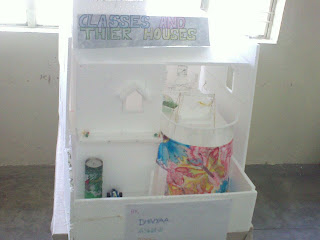 After having familiarized children with all the above in some depth I asked them to present their understanding through certain visuals and models. Children tried to determine classes based on people's material life. In itself it did not involve more than collecting pictures from magazines, advertisements and making models and drawings which established the fact that certain lifestyle are connected to the professions and the kind of money you make with those professions. But I would imagine I gave them certain frames or contexts to identify and interpret people and society through the prism of classes. Of course it is not just enough to help children to figure out classes and identify them based on certain external attributes. We also need to question why there are preponderance of certain classes in certain societies and why certain classes in history i.e. the upper classes, albeit in minority, always manage to hold on to the reins of political, economic and social power. This is a much deeper question debates on which I have just initiated with the students, answers for which will take a long time to crystallize.
I have included certain pictures and video clippings of the stuff they did which would explain the extent to which they grasped these facets of life in contemporary world and past as well.


Alas! Poor articulation eclipsed all their effort and work which they put in making these models and charts.