This was yet another effort to contextualize certain epochs and specific events that transpired in such epochs - let it be accomplishments of a monarch in a battle, construction of monuments, development of arts etc. In this instance it was to bring about the wider social, environmental and economic processes to relief to the advantage of students of class VIII in the school I was teaching some months back. We had taken them to what was during the reign of medieval Cholas i.e. Chozhas, an important urban centre i.e. Thanjavur, which is located in the Kavery delta region of Tamil Nadu. Today as well Thanjavur is an important town and headquarters of its eponymous district but continues to derive much of its fame and glory from its medeival past where its famous Brihadesvara temple built by Rajaraja Chozha occupies centre stage. Incidentally this year also marked the 1000th anniversary  of the temple celebrated by government with a 1000 member dance performance within its precinct. (which in my view failed to awe or inspire.)

The Kavery Delta region was and is the food bowl of Tamil Nadu famed for its ponni rice and sugarcane. Not just Thanjavur but the near town of Kumbakonam and the still bigger town of Tiruchy  formed the most urbanized region in entire south India. But most of urbanization (though not all perhaps) in ancient and medeival times basically centred around temples. Hence the Kavery delta regions comprising of Thanjavur, Kumbakonam, Tiruchy and Gangaikondachozhapuram may have the highest  per capita temples in the whole of south India.

During my interactions with the kids lot of things were discussed as part of our effort to contextualize. Going around in the bus the lush paddy fields were making its own statements which I urged the kids to take cognizance of. That the Kaveri delta region was high on production of surplus became evident. Also brought to their notice was the network of canals criss-crossing the countryside. This as such added further to productivity of the region. The rather dominant concentration of the Brahmins and the agrahara in this part of the region, certainly during the Chozhaa period (850 - 1250 CE approx) was the third aspect that was highlighted and figured earlier in the classroom discussions on Chozhaas. Finally we also looked at what such high productivity could also mean in terms of possibilities of taxes for the state and while discussing the temples, I also debated the social changes that emerged in much of the Deccan around this time. The new dominant peasant classes sought to assert political power and in this endeavour I highlighted the temporal significance of the temples, the patronage of priestly classes and how all these legitimized power of these kings, who were basically from the dominant peasant communities. (recall that this aspect i had also intervened in the form of a play. Click here for the post) Hence, the combination of environmental factors, political and societal intervention through the construction of canals and check dams, the presence of agraharas , the battles waged by the kings and the loot and plunder that accrued thus and the construction of temples all were linked in some kind of a dynamism which helped in the creation of a very powerful state in south India. (Two chapters from the Eklavya social studies textbook of class VII gives the best  write up on these social and political processes - Click here and here)

One bunch of kids presented this understanding rather well... 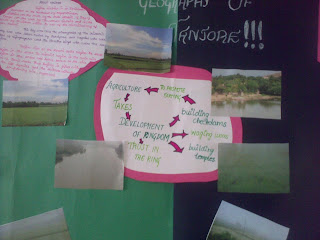 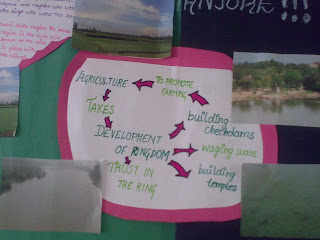 So here it was...the classroom interactions, the trip to the various temples, our appreciation of the temple art, architecture - the vaastushastra of temple construction viz. the vimanam, gopuram, mandapa, antarala, garbagriham and the sui generis artistic style of the Chozhaa iconography - the Natraja for example. These helped me as well to get a deeper perspective on south Indian history and it was fun. As is probably evident, not much of names, dates and chronology of the Chozhas was discussed. We did not ignore them but my effort was to understand and help children understand factors, the macro picture that impinges on the micro. But this often impacted many kids in terms of their inability to understand such not so visible factors shaping the course of events. Many would comfortably give the names of kings, dates, temples, reel out data like features of administration etc. Whereas when trying to understand the context and the larger picture and connect the dots between these and the 'cold' and 'simplistic' descriptions of an empire, they often floundered. But I could sense that notwithstanding these difficulties all of them seriously shared my enthusiasm to look at history in a more processesual fashion  Really miss the wonderful time I had learning myself and help the kids learn.
worksheet/activity based