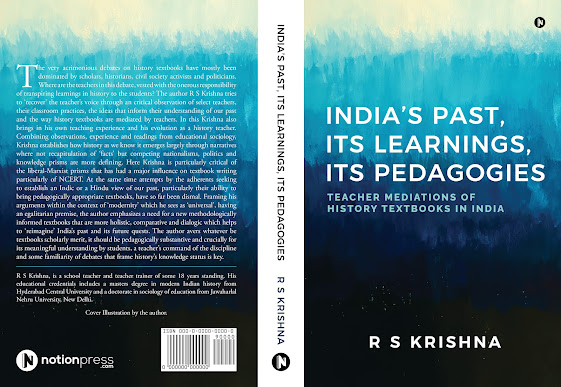 The few who have been following my blog, over the last 15 years, I have shared a lot on history, historiography, its politics and its pedagogies. All these have now been brought together as a book. It was long overdue.

It’s a pretty long book and I suppose intense at many levels.  I present a summary here which I muse can also be seen as a précis of all my posts and also the shifts in my evolution as a history teacher and an eternal student of social sciences. I have always been deeply engaged and responding to issues and tumults in all domains of our socialisation in this site.

History, representations of past and its textbooks have remained mired in controversies. Notwithstanding certain nuances and differences, broadly two visions jostle to inform our understanding of history. One is the left and so called liberal version in which India is construed as a modern imagination which was brought to life in the course of the freedom struggle. Second is the Indic view which accords certain primordiality to India's nationhood emerging from a culture much before the common era. Implicit in such polarizing coordinates of the debate is the view that a dialogic, constructivist and democratic transaction of history is possible only in the former framework while the latter can only be enabled in sententious and authoritarian curricular settings and pedagogies.

A very acrimonious debate is transpiring but whose interlocutors are mostly scholars, intellectuals, historians, civil society activists, journalists and politicians. Where are the teachers in this debate, vested with the onerous responsibility of transpiring learnings in history to the students? Secondly even as the liberal and Marxist scholars claim to be more pedagogically clued in, is history imagined in ways that is experiential, practical, factoring not just students cognitive proclivities and capacities but as something that can concretely inform their daily life? And is history's normative import destined to remain couched in didacticism?

The methodology and inferences

This is where my work comes in. I respond to these posers and more in seven chapters where my own experience as a teacher and teacher trainer accounts for its substantive part. Methodologically this work then is distinguished in being autoethnographic - where a researcher's subjective self is credibly brought forth. Unlike the wisdom in conventional research where the world is meant to be presented in all its objectivity, this work is part of a tradition where subjective interpretation too is seen as considerably enhancing our understanding of both the natural and social world we inhabit.

With my personal reminiscences along with observation of six teachers, the teaching of history is disinterred where textbooks mediate their practices. I argue, whatever be a textbooks scholarly and pedagogical merits, for a worthy and meaningful learning, a teachers command of the discipline and the familiarity of debates that frame history's knowledge status is key. Yet sadly what transpires across most schools are lamentable classroom interactions with teachers way out of their depths. Yet their failure indicates more systemic shortcomings than personal culpabilities. At one level teachers' inability to bring an enlightened hermeneutic to their teaching has a lot to do with poor professional status and qualifying standards failing to draw the best of intellectual, enterprising and resourceful talent. The quality of professional training on offer is woeful. The past continues to be no more than 'factual' recollection which unravels in chronological uni-linearity, where memorization is the main cognitive act. No wonder the vast majority of students remain alienated from the discipline.

Even as my work argues for more robust pedagogies, ultimately pedagogy cannot be separated from whats and whys of a discipline. In bringing my own evolution as a teacher I delineate and reason my increasing discomfort with scholarship that end up propping a normativity through a highly abstracted, contrived and selective reading of the past. The National Curriculum Framework 2005 and under its guidance the current NCERT textbooks is underpinned by essentially an Eurocentric and colonial sociological framework. I do acknowledge that such a framework in focusing on aspects of economy, social and cultural processes explain and expand our understanding of the past beyond the narratives of political history. However for all their claims of empirical scientificity a certain kind of essentialism and reductionism inheres in their framework. The historians behind the writing of NCERT textbooks hardly explore possibilities of a normative and lived tradition of harmony, mutual coexistence inspired by Indic (if not labelling it as Hindu) socio-religious texts and dharmic notions. That these values could have possibly embedded social and political life in pre-Islamic past is completely ignored. In such a sense a different societal character or ontology other than one of conflict which according to Marxist -'liberal' historiography characterize ancient Indian culture, needs unravelling. Its singular myths, folklore, literature, inscriptions and textual sources which professes exploits, and deeds of monarchs extraordinaire and describes social conditions unique to its time and place could also be seen as imbued with a discourse of the ethical and practical. Less meant to be literal, such texts could be read as symbolic and metaphorical injunctions better understood in context of the normative values intrinsic to Hindu culture, outlook, disposition and its 'being'. Such a prism possibly could explain several aspects of our pasts in certain harmony and cohesion even as several heterogenous traditions, beliefs and cultures evolved in situ (Buddhism, Jainism being obvious examples) vying with each other. But did they undermine several continuities, overlaps, fusions, and therefore not to be characterized as 'Hindu'?

In contrast what we have is a rather schismatic view of caste, class, sects, languages and power dominating ancient Indian society that undergirds Marxist-'liberal' historiography, which seeps into NCERT texts, covertly if not overtly. Tolerance, inclusivity and harmony becomes issues for such historiography only with the beginning of Islamic rule when establishing their syncretic character becomes a rather overarching concern.

Politicising such a Indic notion as many liberals are wont to argue, is not fencing one's identity in insularity, inventing a faith by 'othering' or mere ruse for power by agrarian and petty bourgeois classes but giving such an identity a character, dignity, presence and respect. Who is to say and argue what is worth politicising and the knowledge which helps such politicising, erroneous? Identities particularly based on certain antiquity, indigeneity, normativity, matter and this cultural identity have certain anchoring qualities. This is in contrast to a deracinated narratives of bland secularism touted by the left that barely hinges people much less children notwithstanding pious attempts for reimagining India in seemingly modern ethos. Therefore we need a history curriculum and pedagogy drawing from such narratives that resonate with thinking, practices, rituals, sensibilities obtained in people's daily experience and socialization.

Far from romanticizing and mythologising a past this is a perspective which too can be usefully employed in interpreting historical sources and be so validated. However mere rhetoric, didacticism and assertions of ancient glories and continuing with a jeremiad of woes and possibilities lost under Islamic and colonial rule will just not suffice. There has to be more concrete, relevant and practical purposes to history and social sciences even as the majority of students opt for careers in technology, finance, medicine and management.

But contra such a perspective, my work quotes few historical works which establish incipient characteristics of modernity seen in ways of trading, manufacturing, social change on one hand and thinking, ways of looking at the world and its past on the other, arising on Indian soil well before colonial epoch and not necessarily as an exclusive European contribution. Forces of modernization and examples of it were already at play even before colonial policies consciously wrought changes greatly warping and distorting India's transition.

So along with arguing for history teaching & learning as an important tool for nurturing citizenship I make a case to go beyond class, caste and conflict perspectives. Secondly I also argue that several aspects from our culture and daily experience like technology, food, health, sports, ecology, money, manufacturing, business, labour etc needs to be brought into history and social science curriculum - its textbooks and not in the least greatly enhancing teachers' capacities to engage with the discipline likewise. This will be tuning the discipline to a modernising society and economy and also factoring children's socialization to render it practical and concrete. Historicising such aspects which are also subject matters of sciences, engineering, medicine, law and management will among other things break the knowledge silos and also alter our understanding of the way the world works. History can reveal so many aspects of our material existence as closely knit where changes in one domain provides context and prompts for innovations and developments in seemingly disparate unconnected domains of technology, engineering, manufacturing, urbanization, health etc.

While I provide such pointers, the agenda is a challenging one. But first there has to be a consensus. I position my work sympathetic to certain epistemic framework, politics and ideology intrinsic to Indic heritage but which in ‘haloed’ scholarship portals is mostly dismissed for its alleged ahistoricity, fabrication and prejudice. Even as I counter this view as limited, jaundiced and selective I also make it clear that the past cannot be fashioned through sloganeering, declarations and diktats. Knowledge creation is a slow, dialogic and constructivist process. If we subvert the process with shortcuts, the learnings are not going to endear and endure. Mere presentation of disembodied facts make history banal. In so dialectically laying down the larger coordinates of the debates, the work I hope will provide grounds to come up with credible and alternative historical pedagogies as the nation works out a new curriculum based on NEP 2020.

This book is written in a style which combines elements of journalism, newspaper eds, op-eds and blogs. It does not purport to be a true-blue academic work following standard formats of monograph publication - excessive referencing, footnoting and rest. It certainly will make some demands on a reader but yet it will reward one with fresh insights and possibilities. This work I'm confident will appeal to the more discerning readers, certainly beyond academia particularly those who seek to understand the domain of schooling, teaching and the politics of representing India's past as the country transitions to modernity.

The book is available in Amazon & Flipkart