Dipping into the anthropology of Kantara… 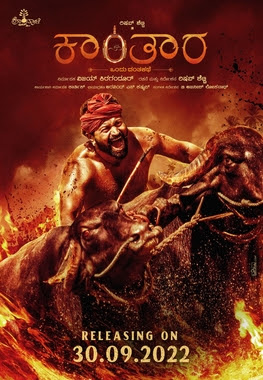 I took my time to watch Kantara, thanks to its release last week on OTT platform. While the world was profuse in its encomiums, I couldn’t say much till I had viewed the film and it took a while for various facets of the film to register. While the plot of the film is rather well known, its implications and import is rather subtle even as the narrative and idiom may be rather on your face. I also don’t claim to have studied Malnad’s culture in any depth but base my views on certain anthropological ‘common sense’.

Set in Malnad Karnataka’s lush and bucolic environ, the Bhuta Kola ritual is primed to be the film’s pivot. Among other things of any ritual, the Bhuta Kola ritual is apparently one of a ‘collective’ bringing all and sundry communities irrespective of caste, class, gender and status (caste) into it. The boar (Panjurli) is representative of the forest spirit and an all pervading one where both an individual’s and communities well being, their current miseries, future anxieties depend upon the seeming propitiation of the spirit. For the spirits capacity to wreak vengeance is feared if one or the entire community were to deviate from the path of righteousness, (dharma).  To maintain a sense of collective too is paramount. For this in many ways can keep the entire community in equilibrium and cohesion notwithstanding certain friction and acrimony which is but natural in an apparently hierarchical society. The kola that invokes the spirits are vibrant, exuberant, rich in colours and carry shades of significances and meanings. The ordained person in whom the spirit embodies in all the grotesqueness of masks, attire and facial dos, dances, shrieks, gesticulates in frenzied action to the awe and reverence of the community members gathered who await its oracular pronouncements. What Kantara brings to fore in certain discrete and subtle fashion in contrast to the rather prosaic and routine tropes, characters, situations that is otherwise also used in the film is in its understated referencing to both known and lesser known myths. We all are familiar that the boar as Varahaswamy rescues mother earth deluged under the seas where Varaha is none other than Lord Vishnu. In other words Varahaswamy is the keeper safeguarding the well being of our lands in its entire totality. Its more local form, the deity of Panjurli oversees the presence of harmony within the community and their relationship to mother earth and the ecology which supports them. The relationship between the villagers, the landlord and the state all remain in an equilibrium. But there are forces always ready to rock the equilibrium.

Earlier in the film, it’s the landlord in desiring to usurp the common peasants lands, upsets the equilibrium and faces its comeuppance. Then his successor apparently seems to understand better the socio-ecological dynamics in practice but this time the equilibrium is sought to be upset by the strong hand of the state in the form of the forest officer Murali. In the meanwhile the lead protagonist Shiva himself rocks the boat by ruffling people, social equations and indulging in wanton hunting (and hunting of boars no less which he relishes). Eventually as it turns out, it’s the current landlord Devendra who is merely biding his time harbouring naked and ruthless greed in securing all the lands, given its ever increasing economic value. However as indicated, Devendra is first seen to be indulgent, harmonising his status with larger cultural, social and ecological fabric that sustains the entire community in seemingly robust unity. So diagrammatically I present below my reading… 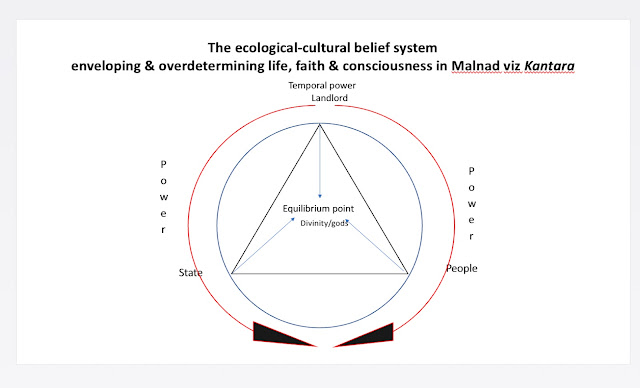 Therefore not just the apparent power of the state or the landed elite, even common people (like Shiva) can leverage power that can lead to conflicts and incur the wrath of the forest spirit and which can wreak its vengeance in ways which may appear accidental, arbitrary and whimsical. Indeed the divine too plays its mischief for which it needs to be placated. Power is circular and so is the society rather than triangular but yet power is finally reposed with the deity who is central. It arbitrates matters factoring everybody’s well being. So as long as all three key players retain certain semblance of collective where each partake from the land, water and forests their share (the trees, forest produce, animals, not excluding the venerated boar itself and even some excesses of the landlord or Shiva and his cronies) that does not jeopardise the larger well being of the environ and its people, conflicts are minimal and more benignly resolved. However when any stakeholders attempt to assert their power and status beyond their traditional brief, upset the delicately arrived at equilibrium, the deity through the oracle forewarns and events seemingly take a life of its own but to the determinant of all, not just the antagonist.

Rishab Shetty’s Kantara dips into this fund of folkloric sensibility to present a rather complex cosmology of people’s faith, belief and practices. Rishab Shetty could indeed have broken the above holism and talked down to the audience but then the film would have become rather dull. Instead a subtle, intuitive understanding is presented to make the film eminently watchable and interesting. Unfortunately to my dismay and disgust I came across some reviews, particularly by an ill informed Rohan Naahar of Indian Express and further by Kannada actor Chetan Kumar in denying the film’s apparent Hinduness, belittling such sensitive and deeply informed presentation of cultural outlooks. The use of conventional tropes of commercial Indian film making does not take away the rather unusual premise, the lessons to be related, understood and learnt from the culture, thinking and faith of the people of Malnad. Rishab Shetty presents this all in certain novelty, confidence and self assuredness.