Helping students to arrive at historical outlooks through concrete evidences
Over the last four weeks, there were occasions for me, where I encountered history in action so to speak or more specifically reaffirmed my belief that past is not what our commonsense would have us believe. Second, many of our practices, customs, "values" including language we use and the way we use it are again historically conditioned.

Common sense tell us that India has mostly been a Hindu society (if not a nation) before the advent of Muslim political rule. But if we say that ancient India was largely Hindu we need to make a qualification and a very big one at that. Hinduism, as it is practised today and as the way people see it, was never the kind of dominant force and religion in India till about 400 AD, that it is today. It was Buddhism which formed and shaped the world view and sensibilities of the majority of its people in India till well about 1000 AD (most certainly till the beginnings of the Guptas around 400 AD)

Was away holidaying in Himachal's Lahaul-Spiti Valley (LSV) last month. And what a valley it was! Swathed in every shades of brown, LSV is basically a cold desert - stark, barren with swatches of green (being the cultivated parts - peas, barley, corn are most dominantly cultivated) And there in middle of nowhere are these remote Buddhist monastries like Dhankar, Ki and Tabo.
The latter has some fantastic Buddhist murals akin to those found in Ajanta (and hence often referred to as the Ajanta of the Himalayas- Alas could not take photos inside...usual restrictions applied!!) Buddhism continues to be the predominant religion in these sparsely populated parts. And then it occured to me - further north west in Afghanistan (Bamiyan statues), Ladakh (innumerable monastries here) and then in central India (exemplified by Ajanta), in the east (Tantra, Nalanda) and then deep south (Tamil epics of Sillapadikaram and especially Manimekhalai.) were evidences to prove my above stated assertion - All these examples were deeply reflective of ubiquitous Buddhist presence in much of ancient and even early medieval India. 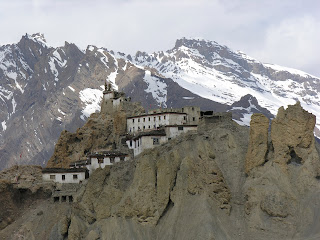 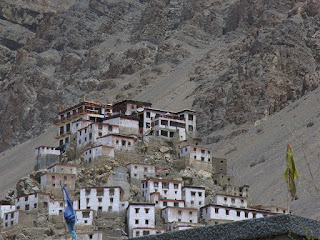 The spectacular Ki monastery
But why did Buddhism decline? Look at it this way - drawing parallels from ancient and beginnings of medieval Europe, if Europe is seen to be Christian today it became so only from the medieval period similar to the way India became "hindu" in the early medieval period. Both Christianity and Hinduism at some level became more expedient for the new political economy that emerged in medieval times and hence its increasing acceptance and popularity. More important for me here was the framework I had within which I was able to place all these concrete evidences or sources and reaffirm the perspective - that ancient India was largely Buddhist and instances that I have been quoting only goes to prove that point. What I would or should really be looking into now is whether my own students, when I put across all these evidences would arrive at similar summations? I have got an activity here I guess to help them see the need for evidence in history and how evidences can be used to arrive at certain perspectives and how these perspectives can be used to counter certain common assumptions on our past. 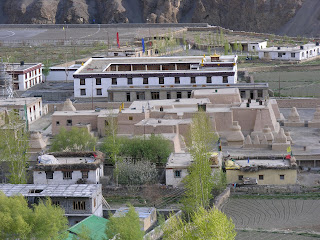 The Tabo monastrey - one can also see the old monastrey built circa 1000 AD and built out of mud - standing the test of times, where one can witness some of the finest Buddhist murals

And then I get this e-mail while I was in the beautiful valley of Manali - in the shadow of Pir-Panjals, forwarded by my father in law and boy! Have a look at it here. Titled Life in 1500, it is full of nuggets of information but information which tells us so much about our customs and traditions (Here it is the European past). We take so many of them for granted - things as simple as bathing, marriage, the idioms, proverbs that we use etc all have concrete historical origins. Check it out and you will gather what I'm driving at. I think I have another activity in hand while dealing with feudal Europe - how many usages and contemporary customs in English have medieval origins!

Thus this e-mail and my visit to the Himalayas turned out to be a learning experience for me. Both revealed to me aspects of history which our "common sense" fails to account for. What remains to be seen is how effectively I'm able to use all this as a pedagogic tool in my classroom.
Perspectives/Essays